Greg Szurnicki worked for many years at the Kings Park Psychiatric Center.  He was a local civic leader who was one of the founders of the Kings Park Civic Association and a long time president of the group.  When the Psychiatric Center closed, Greg worked tirelessly, along with other civic leaders and groups, to make sure that the concerns of the residents of Kings Park were considered in any decisions about the future of the property.
His service to the community, which included efforts for senior citizens and veterans, spanned almost fifty years.  In 2006, Greg was named “Suffolk Senior Citizen of the Year” by the Suffolk County Senior Citizens’ Advisory Board.  The nomination for this award was made by County Legislator Lynn Nowick.  When the award was presented by County Executive Steve Levy, Greg was described as an “advocate, role model, leader and volunteer who has enhanced the lives of others.”
To honor Greg’s legacy of service to the Community, the Greg Szurnicki Memorial Scholarship is presented to a deserving senior at the Kings Park High School Awards Ceremony each June.

Read sacrificed much of his time to ensure that Kings Park was a great place to live, whether it be skipping dinner to attend Zoning Board hearings, meeting with town officials or other civic related events.
As a new generation of leaders took the reigns of the Kings Park Civic Association, Read not only became our friend but he was also our mentor.
In 2015 a Kings Park Civic Association scholarship was presented in Read's name.
The KPCA will carry on with our mission in his memory.ur paragraph here. 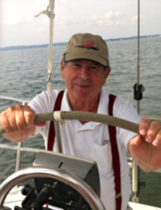 John Read was a past president of both the Kings Park and San Remo Civic Associations. His most recent position in the KPCA was Zoning Committee Chairman and advisor to the board.
Read was involved in the KPCA for over forty years. His experience was unmatched and his opinion on issues paramount.  He was a staunch defender of the San Remo waterfront and had the courage to take on harsh individuals illegally dumping in our industrial area.  Working hand in hand with Greg Szurnicki and other civic leaders, Read was determined to protect the quality of life for all Kings Parker's. The one thing you could be sure of when it came to Read was that he was going to do what's best for the community, even if it meant taking matters into his own hands.

Dan Matarazzo was our friend, colleague and Chairman of the School Committee.  He represented the Civic at every school board meeting and faithfully reported all of the details at our meetings.

No matter the topic, from the annual budget, to school buses or school lunch, he kept us fully informed.  He always shared, with great pride and joy, the accomplishments of the students in our district.

The Greg Szurnicki Memorial Scholarship for 2013 was presented in memory of Dan to honor his dedication to the Civic Association.  He is missed by all of us.